Park Hill is a council housing estate constructed between 1957 and 1961. In 1998 the estate was granted Grade II listed building status. Following a period of decline the estate is currently being renovated by the developers Urban Splash.
The Park Hill Flats were inspired by Le Corbusier's Unité d'Habitation. Construction is of an exposed concrete frame with yellow, orange and red brick curtain walling. The concept of the flats was described as streets in the sky. Broad decks had large numbers of front doors opening onto them. Each deck of the structure, except the top one, has direct access to ground level at some point on the sloping site. Cobbles from the terraced streets surround the flats and pave the pathways down the hill to Sheffield station and tramlines. The lower two pictures show the three stages with some flats still occupied, others empty and vandalised and the third stage of stripping out all but the concrete shell and refurbishing. 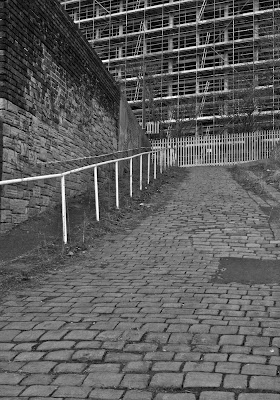 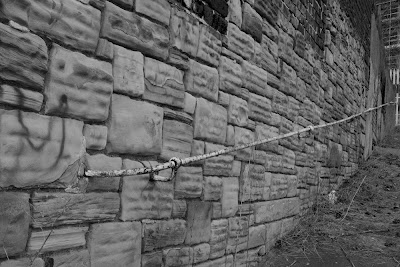 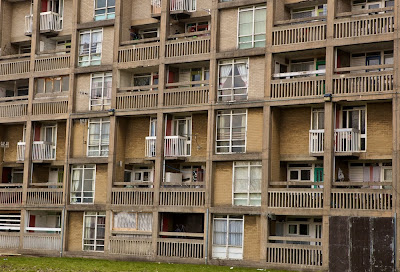 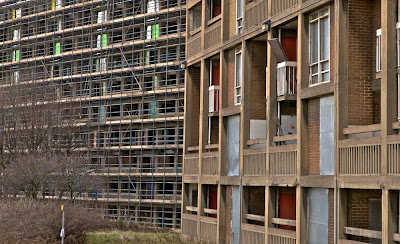 Great blog Ann, lovely commentary on Park Hill right now. On your bottom photograph you can just about see the coloured panels which we’ve put in place to emulate the original coloured brickwork at the scheme. We’ve got some other photos of this on our website: http://www.urbansplash.co.uk/park-hill-update

Thanks for comments - I was only in Sheffield for the day and quickly hopped off the tram when I saw the cobbled path up to the Park Hill development. By then the weather was pretty dull so I didn't really do justice to the site. I would love to visit again and take more photos as the project continues.

I saw these flats in Attercliffe from the railway station on many occasions, but never had the nerve to visit them. Mind you, in the late 70s and early 80s there was no attempt at renovation! In a way I'm glad they've been preserved (unlike Quarry Hill in Leeds, which were demolished around the same time I was visiting Sheffield.