I made a brief visit to Southend this morning after talking at Benfleet club last night, hoping to have a bracing walk along the Pier and back but it was closed along with almost all the rest of the resort. So visited two of my favourite buildings and did composite images in really dull light. 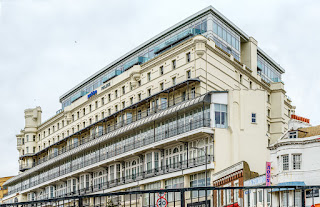 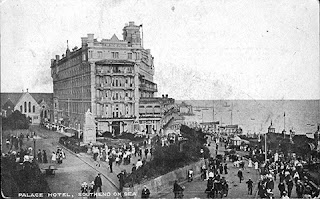 Originally named the Metropole, the Palace Hotel was built in 1901. It was one of the last great Edwardian Hotels. It had 200 bedrooms, a billiard room and a magnificent ballroom. During the First World War it was temporarily converted into Queen Mary's Royal Naval Hospital and treated over 4,000 soldiers.

In the 1950s & 1960s the Hotel got into financial difficulties and was then bought by Polish refugee Motel Burstin who turned the building into an old people’s home.
In the early 1970s the Palace provided cut price bed and breakfast but fell into disrepair. In 2007 is was purchased by the Radisson group and the Park Inn Palace Hotel remains one of Southend's most prized hotels. 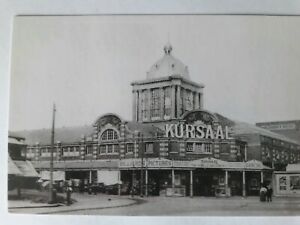 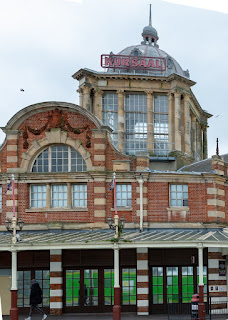 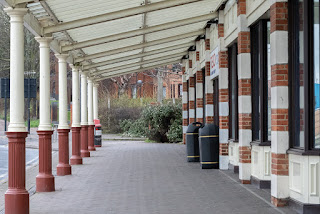 The Kursaal is a Grade II listed building, which opened in 1901 as one of the world's first purpose-built amusement parks.The word Kursaal means a "Cure Hall" or spa, but was adapted to mean a place of healthy amusement. Southend's Kursaal became the largest fairground in the south of England.
Southend United F.C. played at the Kursaal until 1933, when they moved to Southend Stadium.The Kursaal declined in the early 1970s, with the outdoor amusements closed in 1973, and the main building finally closed in 1986. Although the outdoor amusements were redeveloped for housing, the main Kursaal building reopened in 1998, after a multimillion pound redevelopment, containing a bowling alley, a casino and other amusements. Now Tescos have put a shop there